- November 18, 2016
Philip N. Benfey is currently Paul Kramer Professor and Director of Duke Center for Systems Biology; and Howard Hughes Medical Institute (HHMI) Investigator. He graduated from the University of Paris and received his PhD in Cell and Developmental Biology from Harvard University under the guidance of Dr. Philip Leder. He did post-doctoral research at Rockefeller University in the field of Plant Molecular Biology working with Dr. Nam-Hai Chua and was appointed an assistant professor there in 1990. In 1991 he moved to New York University where he became an associate professor in 1996 and full professor in 2001. He was the founding director of the Center for Comparative Functional Genomics at NYU. In 2002 he was named professor and chair of the Biology department at Duke University and in 2003 was named a distinguished professor.
Benfey is the recipient of a Helen Hay Whitney post-doctoral fellowship and an NSF pre-doctoral fellowship. He was named a Fellow of the American Association for the Advancement of Science in 2004 and was elected to the National Academy of Sciences in 2010. In 2011, Benfey was named an HHMI-GBMF Investigator by The Howard Hughes Medical Institute and the Gordan and Betty Moore Foundation under an initiative to support fundamental plant science research. He currently serves on the editorial boards of Science, Developmental Cell, and BMC Plant Biology.
His research focus is to understand how cells acquire their identities. To answer this question, he uses Arabidopsis thaliana root as a model system because of its simplicity, organization and organized pattern. His lab employs the combination genetics, molecular biology and genomics to study the genes necessary for root development along with radial and longitudinal patterning. His lab discovered two genes, SHORT-ROOT and SCARECROW, important for radial patterning of roots. His long term goal is to understand how cells are generated from a stem cell population and how they become patterned and integrated to form functional organ.


He is also a pioneer of cutting edge technology of plant biology. His lab invented a device called RootArray; which allow scientists to grow 60 to 120 seedlings at a time. In this device, it is possible to observe the response of plants and tagged genes too. In 2007, he formed a start-up company, GrassRoots Biotechnology, based on this technology; which uses systems biology approaches to develop new crop traits for the bioenergy, food, and industrial markets. 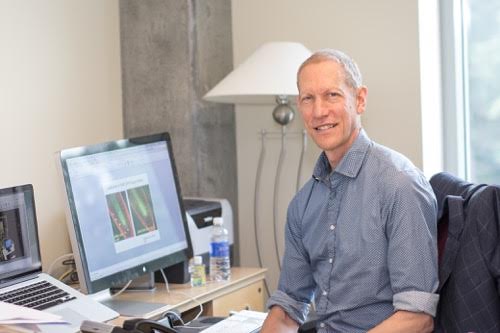 What is your story to get interested in plant biology, and who influenced your scientific thinking early in your career?

I consider myself to be an “accidental scientist” as I originally wanted to be writer. I dropped out of college after a year, worked for a logging company in Oregon, then for a ski area in Utah. At that point, I had to decide if I wanted to go back to college, and opted instead, to hitchhike around the world on sailboats. Unfortunately, I kept hitting hurricane season, so I didn’t do any long journeys on sailboats, which may be why it took me 5 years to get around the world. I worked as a mechanic in the South Pacific, as a bricklayer’s laborer in Melbourne, on the railroad for the Mt. Newman Mining Company in Western Australia, then traveled through Singapore, Indonesia and the Philippines. I worked as a gardener in Japan and began a novel. A year and nine months later, I was only half way through the novel and ready to move on. So, I took the Trans-Siberian railroad across the USSR, arriving in Moscow after eight days and seven nights, very hungry and in need of a shower. I left the USSR on a boat from Odessa, then traveled through Europe ending up in Paris. There, I worked as a carpenter on a barge that was being transformed into a community center. About the same time, I fell in love with a French woman who was attending law school in Paris. I thought it was a pretty good arrangement – she would be a wealthy lawyer who could support me as a struggling writer – until she made clear that her goal was to be an actress. At some point she said, “Not that I don’t have entire faith in your writing ability, but maybe a day job would be a good idea.” To which, I replied, “But, what would I do?” And, she suggested biology. So, I finished my undergraduate education at the University of Paris, then did my thesis at Harvard.

What scientific discoveries over the past couple of years have influenced your research directions and how?

The primary influence over the past few years has been technology breakthroughs. These have included the drastically reduced cost of sequencing, the elucidation of genome editing systems and availability of enhanced imaging platforms.

What do you think will be the next big thing in your specific area of study?

In the field of plant developmental biology, we now have the ability to design and test synthetic circuits, which should help us understand how gene regulatory networks function.

What inspires you to continue in science?

Science is one of the few professions in which we consciously try to reduce obscurity. It is all about adding new knowledge, understanding something that was previously hidden. There is also the creative aspect - you can have an idea in the morning and act on it the same day.

If you had six months off, what would you do with your time?

I’d devote more time to running my new company whose aim is to use sophisticated data analytics to improve crop breeding and human health.

If you were able to repeat your years as a graduate student, would you do anything differently?

I don’t think so. I had a great graduate advisor in Phil Leder at Harvard. He was very supportive as I learned humility in the face of science. He also had a life outside of the lab, which was a very good example.

What do you think are good career moves for young scientists, and why?
I think there is real value in working outside of academia for some period of time. The easiest is to get out between undergraduate and graduate school, but it could be at other times as well. This can provide a valuable perspective, particularly during the frustrating periods of science. I would also suggest that you should watch out when you feel too comfortable. Stretch yourself in terms of areas of interest, techniques, approaches.

As an employer, what are the five key qualities you look for in a potential team member?

I look for people who are smart, have good hands, have quantitative skills and are socially adept.

What advice would you give to a student interested in plant biology today?

If you want to address the critical issues facing the world, most of them involve plant biology. Food and energy security, climate change and social inequality can all be addressed through improved understanding of plants.

This interview was published in American Society of Plant Biologists (ASPB) newsletter in Sep-Oct 2016 isuue. The interveiw was taken by me as a Graduate Student Ambassador of ASPB.
Luminaries

We are almost at the end of another year. Undoubtedly, we came across amazing research and review articles in this year. As plant biologists, we are more focused on plant-specific journals. Along with those plant-specific journals, plant-related stories are making their place into other journals too. Like previous years, this year also, I'm covering plant biology stories published in Cell, Science, and Nature all the year round. In this post, you'll find published papers from Nature.


Dodders (Cuscuta spp.) are obligate parasitic plants that obtain water and nutrients from the stems of host plants via specialized feeding structures called haustoria. Dodder haustoria facilitate bidirectional movement of viruses, proteins and mRNAs between host and parasite, but the functional effects of these movements are not known. Here, they showed that Cuscuta campestris haustoria accumulate high levels of many …
Read more

This weekend I went to the theater with friends to watch "Black Panther". Most of the times, I fall in sleep in the halfway of the movie. Fortunately, I didn't at this time. Apart from that, this movie implanted few questions in the viewer's mind. One issue is definitely about the "heart-shaped herb".


Mythology and Technology of Wakanda
The story of the movie went way back to the history of Wakanda and the futuristic technological advancement of the tribe. There is a subtle link between their past and future. Their groundbreaking future technologies are based on Vibranium. In the past, the place was crashed by a huge meteorite containing Vibranium. It caused massive radiation, stayed in their environment till today and undoubtedly changed the ecology of Wakanda. It shaped the plant life in that region. The radiation-caused mutation gave rise to a diverse plant kingdom, which is rare in the other part of the world. The heart-shaped herb was one of the example…
Read more

It is always fascinating how a small hydrocarbon or 2 carbon containing alkene has huge impact on plants. Yes, you gussed it right. It's Ethylene. First gaseous compound discovered as hormone. It has specific roles in fruit ripening, cell elongation, senescence, seed germination, leaf abscission, defense response and so on.


According to the definition of hormone, it should have two characteristics. Biosynthesized in a small amount by multi cellular organism and work on a distant place from the synthesis site. This classical definition for hormone was provided by Ernest Starling at 1905. Ethylene fulfills both requirement as a hormone. In addition, it can diffues and affect surrounding plants. We may consider it as pheromone in that case.

The initial discovery of ethylene is nothing but accidental observation like penicillin. In 1858, George Fahnestock observed that leaking illuminating gas are causing damage to the plants at greenhouse. During that time illuminating gas was used…
Read more

I am doing this plant biology CNS (Cell - Nature - Science) paper highlights since 2016. Every winter break, it is a fun job for me to do. I enjoy as much as writing a New Year card to my favorite person. It is also a reminder for myself that lots of great science are going on and I have to do better next year and keep trying to make a difference. Here, I have previewed plant biology stories published this year in Nature.

Apical growth in plants initiates upon seed germination, whereas radial growth is primed only during early ontogenesis in procambium cells and activated later by the vascular cambium. Although it is not known how radial growth is organized and regulated in plants, this system resembles the developmental competence observed in some animal systems, in which pre-existing patterns of developmental potential are established early on. Here they show that in Arabidopsis the initiation of radi…
Read more

Mutant Series: TOO MANY MOUTHS (TMM)

If you don't have clear idea about stoma and pavement cell, I'll request you to go through the following link first.
Mutant Series: SCREAM (SCRM)
Back in 90's, the knowledge about stomatal development and regulation was limited. In the forward genetic approach, we can mutated genes all over the genome in a random fashion. This job is mostly done by Ethyl Methane Sulfonate (EMS). From that randomly mutated population, we screen for our desired traits or phenotypes. In case of stomatal development, if we can find phenotypes containing less or more stoma or abberant pattern.
Ming Yang and Fred D. Sack from Ohio State University took the forward genetic approach to understand the stomatal development. They have found two interetsting mutants: tmm and flp. tmm and flp represent  too many mouths and four lips, respectively. In case of wild-type plants, we rarely observe two adjacent stomata cells (left panel). In contrast, tmm shows cluster of stomata cells which is opposite to t…
Read more