Showing posts from June, 2016
Show all

Why Arabidopsis Why: Argonaute 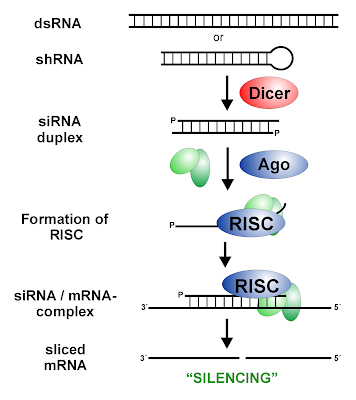 Small-interfering RNAs (siRNAs), microRNAs (miRNAs), transacting siRNAs (tasiRNAs), and Piwi-interacting RNAs (piRNAs) are involved in gene silencing in animal and plant cells. Argonaute protein plays an important role in RNA-induced silencing processes. Argonaute protein plays a catalytic role by binding with non-coding RNAs such as siRNA, miRNA, tasiRNA and piRNA. Then, non-coding RNAs guide Argonaute proteins to bind their specific targets based on sequence similarity and cleaves mRNA or inhibits translation. Please follow the pciture below to get a quick review. ( Source )  Research in plant science helped a lot to understand that RNA-induced post-transcriptional gene silencing. The first proof came with the example for 1-aminocyclopropane-1-carboxylate oxidase (ACO) of tomato plant. In transgenic plant they showed that after expressing specific 25 nucelotide complementray to ACO abolishes mRNA. This report gave the idea that small antisense RNA is involved in post-tr
Post a Comment
Read more

Why Arabidopsis Why: Alzheimer's Disease 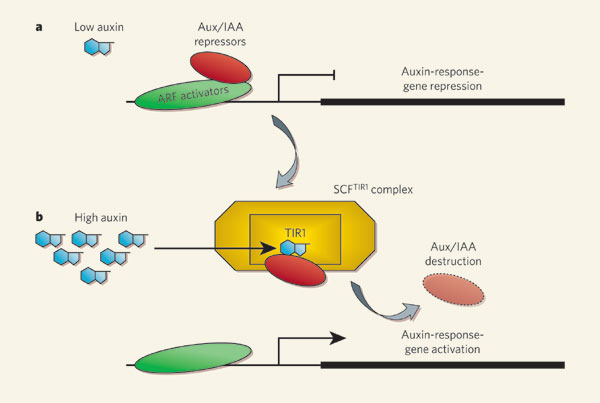 In previous two posts of this series, I picked up two examples ( Cauliflower & Ethylene Signaling ) where our gained knowledge from Arabidopsis had been used on other plants. But this post will take us one more step forward. I will go through an amazing story where research on Arabidopsis sheds light on medical research. Probably, you got some idea from the title.  Auxin is highly studied plant hormone for around 130 years, if we count it from Darwin and his son's research. But, the understanding about auxin transport and signaling advanced due to the advent of model plant Arabidopsis in research. Now we have better knowledge about auxin perception through its receptors and downstream events. In simplified form, Auxin Responsive Factor (ARF) is repressed by AUX/IAA protein in presence of low level of auxin inside the cell. But, in presence of high level of auxin, repressor AUX/IAA protein has been degraded in an ubiquitin dependent manner. Interesting point to mention t
1 comment
Read more

"Rejoice when other scientists do not believe what you know to be true. It will give you extra time to work on it in peace. When they start claiming that they have discovered it before you, look for a new project."  "Intriguingly, I once read that although most postgraduate students who want to become academics do not become academics, those who "fail" to become academics are happiest."  "At first, I thought open access was a wonderful idea: it would allow everyone access to the scientific literature. But now I have doubts. Electronic publishings seems to be plagued with unethical practices. Even e-journals from respected publishers appear to be operating dubious practices, such as "pyramid selling", in which someone is appointed senior editor to recruit 10 editors, to each recruit 10 more specialist editors, who are each asked to produce a special issue with 1-20 papers in their speciality. Then, BANG! The journal could have
Post a Comment
Read more
More posts