Make it simple. Leaf is usually green in color and this color is due to Chlorophyll. But Chlorophyll has much more important job rather than providing green color of leaf. Plants produce their food through photosynthesis, a process of converting sun light to energy, where Chlorophyll plays major role. If we focus about green color, the degradation of Chlorophyll explains the change of leaf color. The first step of Chlorophyll catabolic pathway is the conversion of Chlorophyll a to Pheophytin a. This step is driven by Mg-dechelatase. But, it was unknown, which gene is encoding this Mg-dechelatase? So far mutants identified from Chlorophyll catabolic pathway shows "stay-green" phenotype. This "stay-green" phenotype is reminiscing about Mendel's classic experiment where he observed a green cotyledon mutant. That protein was identified and known as STAY GREEN (SGR). But the function biology study of SGR was elusive at that point. 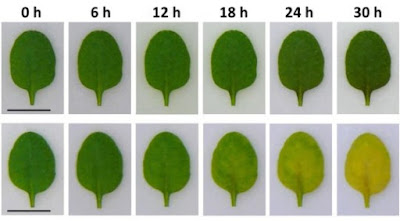 In a recent paper published in The Plant Cell showed that controlled induction of SGR changes the color of leaf. At the same time, experiments confirmed that SGR converts Chlorophyll a to Pheophytin a. But, SGR doesn't convert Chlorophyll b as it has substrate specificity for only Chlorophyll a. Chlorophyll b can not be degraded directly. First, it has to be converted into Chlorophyll a and then degradation.

The experiments strongly suggest that Mg-dechelatase is involved in chlorophyll degradation via SGR. Their results also suggest that SGR can also extract Mg from chlorophyll embedded in the light-harvesting complex, therefore leading to degradation of it. "It remains unclear whether SGR plays a role via Mg-dechelatase activity in supplying pheophytin a for the process of photosynthesis" says Hisashi Ito. "Little is known about the mechanism by which an enzyme extracts a metal ion from an organic compound. Our study may lead to the discovery of novel reaction mechanisms."