Showing posts from January, 2016
Show all

The title of post may seem little bit catchy, and truly it is. It had been started from Darwin's observation about insectivorous plants. From that time, Venus flytrap (Dionaea muscipula) has become the striking example of adaptive evolution. Its immediate and rapid capture method shows the perfect demonstration of sensory motor system that involves neither nerves nor muscles.  Carnivorous plants, such as the Venus flytrap ( Dionaea muscipula ), depend on an animal diet when grown in nutrient-poor soils. When an insect visits the trap and tilts the mechanosensors on the inner surface, action potentials (APs) are fired. After a moving object elicits two APs, the trap snaps shut, encaging the victim. Panicking preys repeatedly touch the trigger hairs over the subsequent hours, leading to a hermetically closed trap, which via the gland-based endocrine system is flooded by a prey-decomposing acidic enzyme cocktail. According to the researchers: " we asked the question
Post a Comment
Read more

One of the most inspiring young plant biologists of our time is undoubtedly Niko Geldner. Around 15 years ago, his published work on GNOM gave us the idea of PIN1, auxin efflux carrier, trafficking between plasma membrane and inside the cell. Lately, he started working on Casparian strips and brought old textbook idea in vibrating scintific story again. When I look at his work carefully, he always brings direct impact on our textbook level through his research articles.  His recent article entitled "Adaptation of Root Function by Nutrient Induced Plasticity of Endodermal Differentiation" has been published last week on Cell. I can't resist myself to go over the paper and see upcoming tetxbook-level-impact!  If we follow the above figure (adapted from the same article) carefully, we can say that Casparian strips (CS) block transport between endodermal cells and suberin lamellae suppresses uptake into the cytoplasm of endodermis. One more important thing to me
Post a Comment
Read more

Why Arabidopsis Why: Cauliflower 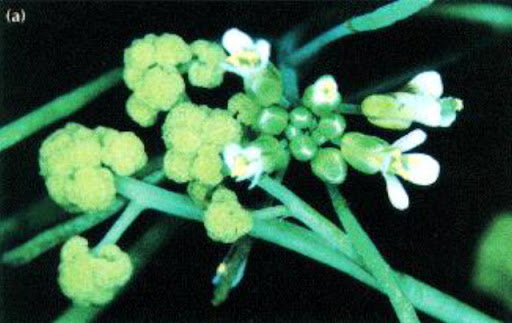 As a plant developmental biologist, Arabidopsis thaliana is my most favorite thing to work with. There is always few frequently asked questions regarding the plant I use. Does it produce any grain? Does it provide fruits? Does it has ornamental value? and so on. To make the long story short, it is a weed!  Fellow researchers think Arabidopsis as a toy which has no economic value. Sometimes they make fun out of me about Arabidopsis . The worst case happened when they provide a new name for me. ARIBIDOPSIS (Arif + Arabidopsis )!  Here comes superficial logic behind Arabidopsis . Think about E. coli for a second. It's a simple bacteria like any other ordinary one. Scientists started to treat it as model and knowledge gained through the study of it has been applied for decades. Same thing is true for single celled yeast, mice, C. elegans , drosophila too.  The following features have made Arabidopsis as a model plant.  Life cycle, more precisely from seed to seed
Post a Comment
Read more
More posts