- March 15, 2016
It is always fascinating how a small hydrocarbon or 2 carbon containing alkene has huge impact on plants. Yes, you gussed it right. It's Ethylene. First gaseous compound discovered as hormone. It has specific roles in fruit ripening, cell elongation, senescence, seed germination, leaf abscission, defense response and so on. 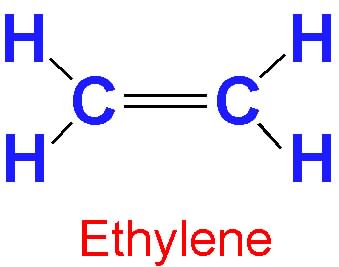 According to the definition of hormone, it should have two characteristics. Biosynthesized in a small amount by multi cellular organism and work on a distant place from the synthesis site. This classical definition for hormone was provided by Ernest Starling at 1905. Ethylene fulfills both requirement as a hormone. In addition, it can diffues and affect surrounding plants. We may consider it as pheromone in that case.

The initial discovery of ethylene is nothing but accidental observation like penicillin. In 1858, George Fahnestock observed that leaking illuminating gas are causing damage to the plants at greenhouse. During that time illuminating gas was used almost everywhere and supplied by underground pipes. So, gas distributors, plant growers, general people- everyone was concerned to know the real causative agent behind this incidence.

In 1901, Dimitry Neljubow identified the causative agent as ethylene. He showed that ethylene has triple resposne effect on etiolated pea seedlings. This result was replicated for different species by different labs around the world. That's how it was established as ethylene sensitive bio-assay.

It's true that Neljubow showed the biological effect for ethylene. But, to fullfil the criteria as a hormone, it should be synthesized by plant itself. Until then, there was no report of ethylene production by plants. Interestingly, in 1910, Herbert Cousins observed that fungus causing damage to oranges followed by release of a particular gas, which eventually causes the ripening of banana. This was a critical point, First, the unknown function, involvement in fruit ripening, of ethylene was observed. Secondly, the gas produced during fungus infection could be either from oranges or fungus. This puzzle was solved by the discovery of Richard Gane in 1934. Through quantitative chemical method, he showed that apples syntheszied ethylene. But, synthesis of ethylene in apples and claim it as a plant hormone was not sufficient. Initially the concept of ethylene as plant hormone was rejected by many groups around the globe. On the following year, Gane provided evidences for other plants also. This is how the last piece of puzzle, biosynthesis of ethylene by plants, was solved to establish ethylene as first gaseous plant hormone.

If you are interested after reading this article, there is a good news for you. You are invited to explore, reading and discuss through commenting, about ethylene with me on following posts.
Basic plant science