- April 07, 2017
The most beautiful thing about the plant is a flower. Arabidopsis thaliana has a very small characteristic flower which eventually turns into silique to produce seeds, unfortunately, no fruits! Like any other flowers, it contains petals, sepals, carpels, stamens. During the maturation of silique, it gets rid of sepals and petals.

A recent study from Detlef Weigel team has found one mutant defective in proper silique formation from flowers. They identified the new mutant allele which is an F-box protein and works as a suppressor of the MIM156 (miRNA target mimic 156)-induced developmental and molecular phenotypes. In this mutant plants, levels of endogenous miRNAs are increased and their mRNA targets decreased. Plants constitutively expressing the particular full-length protein simulate miRNA biogenesis mutant phenotype. In combination with such mutants, it loses its delayed floral organ abscission phenotype. 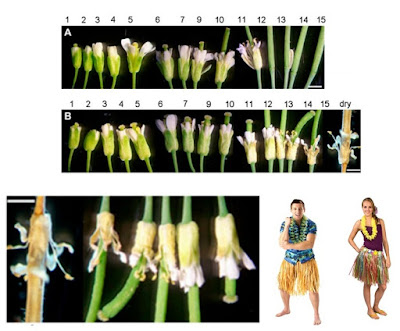 This mutant has a very funny name. HAWAIIAN SKIRT (HWS). But, if we look at the picture above, the upper panel shows the different stages of wild-type from flower to silique development. In the next panel, the hws1 mutant fails to get rid of sepals and petals during the silique development process. For better resemblance, I just flipped the hws1 mutant phenotype and along with this put the pictures of two models wearing Hawaiian skirt. It's really weird to merge such pictures together, but at the end, it's worth doing to show that sometimes the Arabidopsis mutants have such a vivid naming.

In fact, this mutant was first reported and named in a Plant Physiology paper in 2007.

Reference:
A Role For The F-Box Protein HAWAIIAN SKIRT In Plant miRNA Function