- April 22, 2017
In 1993, Philip Benfey published a paper in Development about four mutants which have aberrant post-embryonic root development phenotypes. Among those four root morphogenesis mutants of Arabidopsis thaliana, one is known as COBRA. Certainly, it gives us a feeling of imagining a snake. The question pops up in our mind, what's the story behind this naming? Is it based on phenotype or just a wish during naming?

In this mutant, the root expands in an unusual manner. More precisely, it appeared that the epidermal layer had the greatest expansion. In cob, the epidermal cells were approximately 15 times larger in area than wild-type cells. The cortex and stele were expanded by 2.5 and 3.9 times respectively in this mutant. Interestingly, the aerial parts of cob were very similar to wild-type [1]. This is how the morphogenic study during genetic screening helped to find a mutant specific for root development. In the following figure, we can see the similarities between mutant root morphology and cobra. 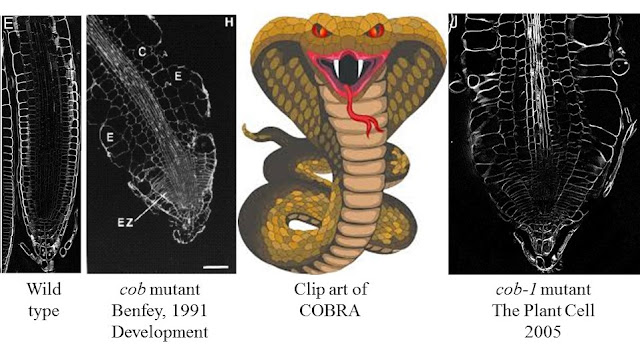 Later, it has been showed that cob-1 has lower levels of crystalline cellulose when grown for 1 week under restrictive conditions, suggesting that COB is required for cellulose synthesis [2]. In one hand, COBRA is a potential regulator of cellulose biogenesis and on the other hand, cellulose microtubule is one of the major components of the cell wall and an important determinant of the orientation of cell expansion [3]. Consolidating all the information together, COB has involvement in cellulose microfibrils orientation and as consequence of this, we observe unusual root morphogenesis in cob mutant of Arabidopsis thaliana.