This is the last month of 2016. I was going through major journals and trying to find out what I missed. Definitely I missed so many which are not directly linked to my research or study. So, I have decided to compile all plant biology related articles from major non-plant specific journals and summarize. In this post, I've summarized from Nature.

Phenotypic traits and their associated trade-offs have been shown to have globally consistent effects on individual plant physiological functions, but how these effects scale up to influence competition, a key driver of community assembly in terrestrial vegetation, has remained unclear. Here we use growth data from more than 3 million trees in over 140,000 plots across the world to show how three key functional traits—wood density, specific leaf area and maximum height—consistently influence competitive interactions. Fast maximum growth of a species was correlated negatively with its wood density in all biomes, and positively with its specific leaf area in most biomes. Low wood density was also correlated with a low ability to tolerate competition and a low competitive effect on neighbours, while high specific leaf area was correlated with a low competitive effect. Thus, traits generate trade-offs between performance with competition versus performance without competition, a fundamental ingredient in the classical hypothesis that the coexistence of plant species is enabled via differentiation in their successional strategies. Competition within species was stronger than between species, but an increase in trait dissimilarity between species had little influence in weakening competition. No benefit of dissimilarity was detected for specific leaf area or wood density, and only a weak benefit for maximum height. Our trait-based approach to modelling competition makes generalization possible across the forest ecosystems of the world and their highly diverse species composition. 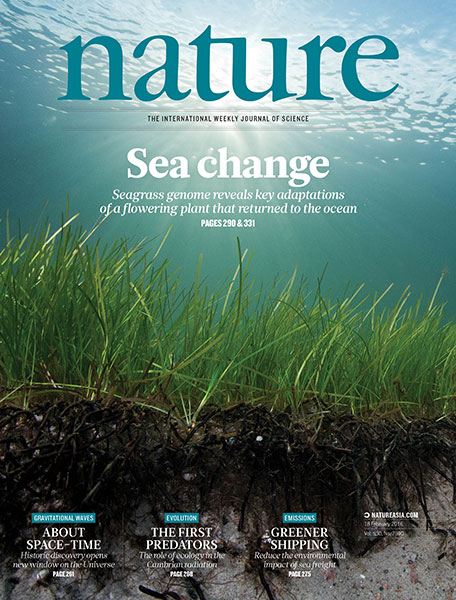 Seagrasses colonized the sea on at least three independent occasions to form the basis of one of the most productive and widespread coastal ecosystems on the planet. Here we report the genome of Zostera marina (L.), the first, to our knowledge, marine angiosperm to be fully sequenced. This reveals unique insights into the genomic losses and gains involved in achieving the structural and physiological adaptations required for its marine lifestyle, arguably the most severe habitat shift ever accomplished by flowering plants. Key angiosperm innovations that were lost include the entire repertoire of stomatal genes, genes involved in the synthesis of terpenoids and ethylene signalling, and genes for ultraviolet protection and phytochromes for far-red sensing. Seagrasses have also regained functions enabling them to adjust to full salinity. Their cell walls contain all of the polysaccharides typical of land plants, but also contain polyanionic, low-methylated pectins and sulfated galactans, a feature shared with the cell walls of all macroalgae and that is important for ion homoeostasis, nutrient uptake and O2/CO2 exchange through leaf epidermal cells. The Z. marina genome resource will markedly advance a wide range of functional ecological studies from adaptation of marine ecosystems under climate warming, to unravelling the mechanisms of osmoregulation under high salinities that may further inform our understanding of the evolution of salt tolerance in crop plants.

Two-pore channels (TPCs) contain two copies of a Shaker-like six-transmembrane (6-TM) domain in each subunit and are ubiquitously expressed in both animals and plants as organellar cation channels. Here we present the crystal structure of a vacuolar two-pore channel from Arabidopsis thaliana, AtTPC1, which functions as a homodimer. AtTPC1 activation requires both voltage and cytosolic Ca2+. Ca2+ binding to the cytosolic EF-hand domain triggers conformational changes coupled to the pair of pore-lining inner helices from the first 6-TM domains, whereas membrane potential only activates the second voltage-sensing domain, the conformational changes of which are coupled to the pair of inner helices from the second 6-TM domains. Luminal Ca2+ or Ba2+ can modulate voltage activation by stabilizing the second voltage-sensing domain in the resting state and shift voltage activation towards more positive potentials. Our Ba2+-bound AtTPC1 structure reveals a voltage sensor in the resting state, providing hitherto unseen structural insight into the general voltage-gating mechanism among voltage-gated channels.