This is the last month of 2016. I was going through major journals and trying to find out what I missed. Definitely I missed so many which are not directly linked to my research or study. So, I have decided to compile all plant biology related articles from major non-plant specific journals and summarize. In this post, I've summarized from Cell. 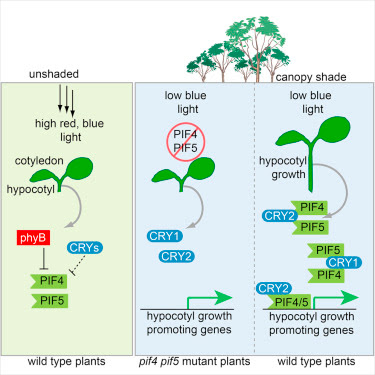 Sun-loving plants have the ability to detect and avoid shading through sensing of both blue and red light wavelengths. Higher plant cryptochromes (CRYs) control how plants modulate growth in response to changes in blue light. For growth under a canopy, where blue light is diminished, CRY1 and CRY2 perceive this change and respond by directly contacting two bHLH transcription factors, PIF4 and PIF5. These factors are also known to be controlled by phytochromes, the red/far-red photoreceptors; however, transcriptome analyses indicate that the gene regulatory programs induced by the different light wavelengths are distinct. Our results indicate that CRYs signal by modulating PIF activity genome wide and that these factors integrate binding of different plant photoreceptors to facilitate growth changes under different light conditions.

Adaptation of root function by nutrient-induced plasticity of endodermal differentiation 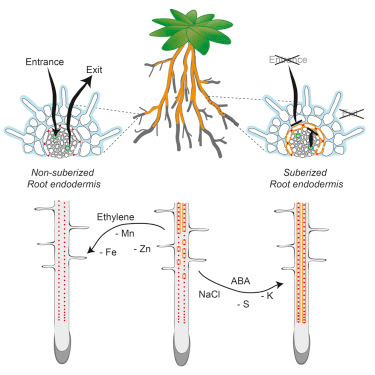 Plant roots forage the soil for minerals whose concentrations can be orders of magnitude away from those required for plant cell function. Selective uptake in multicellular organisms critically requires epithelia with extracellular diffusion barriers. In plants, such a barrier is provided by the endodermis and its Casparian strips—cell wall impregnations analogous to animal tight and adherens junctions. Interestingly, the endodermis undergoes secondary differentiation, becoming coated with hydrophobic suberin, presumably switching from an actively absorbing to a protective epithelium. Here, we show that suberization responds to a wide range of nutrient stresses, mediated by the stress hormones abscisic acid and ethylene. We reveal a striking ability of the root to not only regulate synthesis of suberin, but also selectively degrade it in response to ethylene. Finally, we demonstrate that changes in suberization constitute physiologically relevant, adaptive responses, pointing to a pivotal role of the endodermal membrane in nutrient homeostasis.

A staggering diversity of endophytic fungi associate with healthy plants in nature, but it is usually unclear whether these represent stochastic encounters or provide host fitness benefits. Although most characterized species of the fungal genus Colletotrichum are destructive pathogens, we show here that C. tofieldiae (Ct) is an endemic endophyte in natural Arabidopsis thaliana populations in central Spain. Colonization by Ct initiates in roots but can also spread systemically into shoots. Ct transfers the macronutrient phosphorus to shoots, promotes plant growth, and increases fertility only under phosphorus-deficient conditions, a nutrient status that might have facilitated the transition from pathogenic to beneficial lifestyles. The host’s phosphate starvation response (PSR) system controls Ct root colonization and is needed for plant growth promotion (PGP). PGP also requires PEN2-dependent indole glucosinolate metabolism, a component of innate immune responses, indicating a functional link between innate immunity and the PSR system during beneficial interactions with Ct. 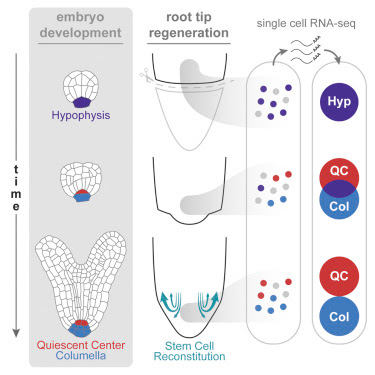 Plant roots can regenerate after excision of their tip, including the stem cell niche. To determine which developmental program mediates such repair, we applied a combination of lineage tracing, single-cell RNA sequencing, and marker analysis to test different models of tissue reassembly. We show that multiple cell types can reconstitute stem cells, demonstrating the latent potential of untreated plant cells. The transcriptome of regenerating cells prior to stem cell activation resembles that of an embryonic root progenitor. Regeneration defects are more severe in embryonic than in adult root mutants. Furthermore, the signaling domains of the hormones auxin and cytokinin mirror their embryonic dynamics and manipulation of both hormones alters the position of new tissues and stem cell niche markers. Our findings suggest that plant root regeneration follows, on a larger scale, the developmental stages of embryonic patterning and is guided by spatial information provided by complementary hormone domains.

Epigenomic diversity in a global collection of Arabidopsis thaliana accessions 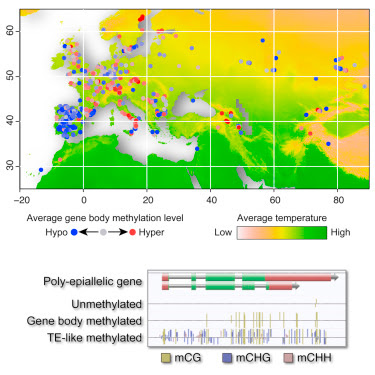 The epigenome orchestrates genome accessibility, functionality, and three-dimensional structure. Because epigenetic variation can impact transcription and thus phenotypes, it may contribute to adaptation. Here, we report 1,107 high-quality single-base resolution methylomes and 1,203 transcriptomes from the 1001 Genomes collection of Arabidopsis thaliana. Although the genetic basis of methylation variation is highly complex, geographic origin is a major predictor of genome-wide DNA methylation levels and of altered gene expression caused by epialleles. Comparison to cistrome and epicistrome datasets identifies associations between transcription factor binding sites, methylation, nucleotide variation, and co-expression modules. Physical maps for nine of the most diverse genomes reveal how transposons and other structural variants shape the epigenome, with dramatic effects on immunity genes. The 1001 Epigenomes Project provides a comprehensive resource for understanding how variation in DNA methylation contributes to molecular and non-molecular phenotypes in natural populations of the most studied model plant. 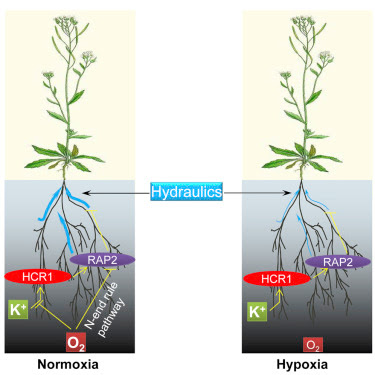 Aerobic organisms survive low oxygen (O2) through activation of diverse molecular, metabolic, and physiological responses. In most plants, root water permeability (in other words, hydraulic conductivity, Lpr) is downregulated under O2 deficiency. Here, we used a quantitative genetics approach in Arabidopsis to clone Hydraulic Conductivity of Root 1 (HCR1), a Raf-like MAPKKK that negatively controls Lpr. HCR1 accumulates and is functional under combined O2 limitation and potassium (K+) sufficiency. HCR1 regulates Lpr and hypoxia responsive genes, through the control of RAP2.12, a key transcriptional regulator of the core anaerobic response. A substantial variation of HCR1 in regulating Lpr is observed at the Arabidopsis species level. Thus, by combinatorially integrating two soil signals, K+ and O2 availability, HCR1 modulates the resilience of plants to multiple flooding scenarios.

As sessile organisms, plants must cope with abiotic stress such as soil salinity, drought, and extreme temperatures. Core stress-signaling pathways involve protein kinases related to the yeast SNF1 and mammalian AMPK, suggesting that stress signaling in plants evolved from energy sensing. Stress signaling regulates proteins critical for ion and water transport and for metabolic and gene-expression reprogramming to bring about ionic and water homeostasis and cellular stability under stress conditions. Understanding stress signaling and responses will increase our ability to improve stress resistance in crops to achieve agricultural sustainability and food security for a growing world population.

For the past several decades, advances in plant development, physiology, cell biology, and genetics have relied heavily on the model (or reference) plant Arabidopsis thaliana. Arabidopsis resembles other plants, including crop plants, in many but by no means all respects. Study of Arabidopsis alone provides little information on the evolutionary history of plants, evolutionary differences between species, plants that survive in different environments, or plants that access nutrients and photosynthesize differently. Empowered by the availability of large-scale sequencing and new technologies for investigating gene function, many new plant models are being proposed and studied.

If you find any article missing and worth to include in this post, don't hesitate to email me: arif dot ashraf dot opu at gmail dot com