- March 24, 2016
Japan Society of Plant Physiologists annual meeting of 2016 was held at Iwate prefecture, Japan hosted by Faculty of Agricuture, Iwate University. Out of 12 symposium, one is dedicated to Ethylene. Clearly, compared to any other phytohormone, much more advancement has been shown in the field of ethylene signaling. Notably, "cleave-and-shuttle" model and translation regulation of EIN2 signaling molecule has improved our idea. This ethylene symposium was entitled as "Ethylene on plant growth and development: from signaling to physiological responses" and organized by Dr. Abidur Rahman (Faculty of Agricuture, Iwate University) and Tomotsugu Koyama (Suntory Foundation of Life Sciences). 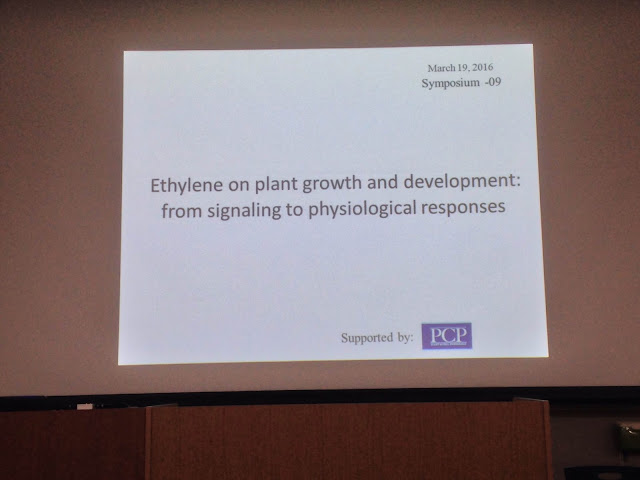 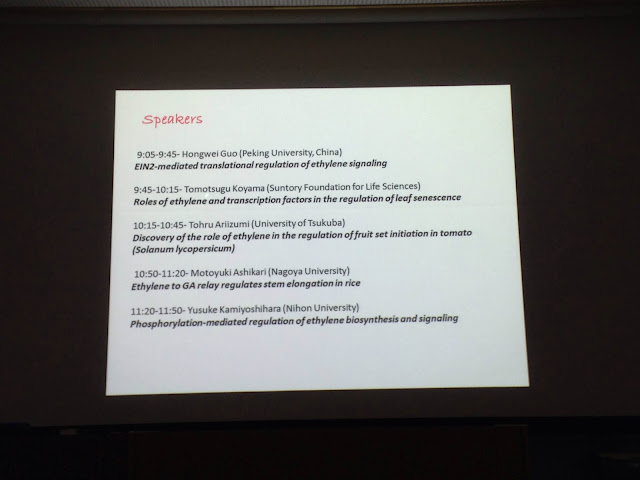 Even few years ago, our understanding about ethylene signaling pathway was straight forward. But, Hongwei and two other groups reported that the C-terminus of EIN2 undergoes proteolytic cleavage, and translocates into the nucleus to stabilize EIN3/EIL1 whose turnover is mediated by two F-box proteins EBF1/EBF2.

Last year two papers were published about traslational regulation of ethylene signaling on the same issue of Cell by Hongwei Guo and Jose Alonso group. Hongwei's group was featured in a video hosted by Cell. 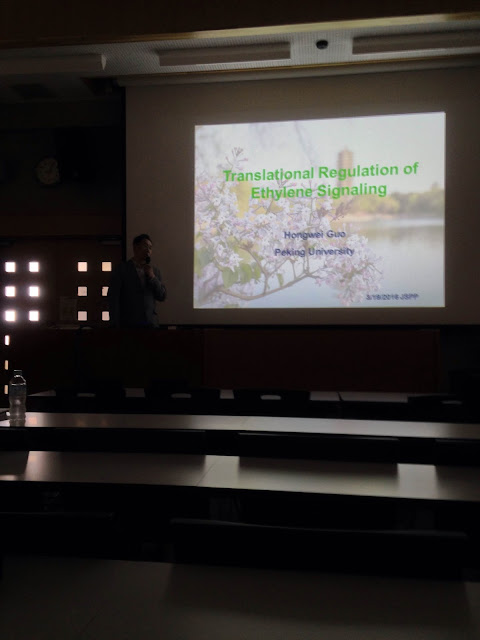 His group reported a novel mechanism of EIN2-mediated ethylene signaling, whereby EIN2 imposes the translational repression of EBF1 and EBF2 mRNA. They showed that EBF1/2 3'-untranslated regions (3'-UTR) mediate EIN2-directed translational repression, and identified multiple PolyU motifs as functional cis-elements of 3'-UTR. They also demonstrated that ethylene induces EIN2 to associate with 3'-UTRs and target EBF1/2 mRNA to cytoplasmic processing-body (P-body) through interacting with multiple P-body fators, including EIN5 and PABs. Their study illustrates the translational regulation as a key step in ethylene signaling and represents the first demonstration of mRNA 3'-UTR functioning as a "signal transducer" to sense and relay cellular signaling in plants.

Dr. Hongwei discussed in details about the background story of their Cell paper. If you are interested to this article or his talk, please find the original research article in the following link below.