- January 22, 2016
One of the most inspiring young plant biologists of our time is undoubtedly Niko Geldner. Around 15 years ago, his published work on GNOM gave us the idea of PIN1, auxin efflux carrier, trafficking between plasma membrane and inside the cell. Lately, he started working on Casparian strips and brought old textbook idea in vibrating scintific story again. When I look at his work carefully, he always brings direct impact on our textbook level through his research articles.

His recent article entitled "Adaptation of Root Function by Nutrient Induced Plasticity of Endodermal Differentiation" has been published last week on Cell. I can't resist myself to go over the paper and see upcoming tetxbook-level-impact!

If we follow the above figure (adapted from the same article) carefully, we can say that Casparian strips (CS) block transport between endodermal cells and suberin lamellae suppresses uptake into the cytoplasm of endodermis. One more important thing to mention about suberin is that although it's hydrophobic in nature, it provides resistance during uptake rather than block.

According to their results, level of suberin is variable dependent on different nutrient stress. And variable suberin levels are mediated through stress hormones i.e. ABA. They hypothesized that ABA induces rapid suberization response, as well as, alters its developmental progression. In summary of this part: nutrient or abiotic stress induces ABA response and next ABA regulates suberin deposition.

On the other hand, nutrient deficiencies of Fe, Zn and Mn can reduce suberin deposition. And, the obvious question was how these specific nutrient deficiencies regulate suberin deposition. They have found that this mechanism involvs ethylene signaling. If we put everything together, it says ABA and ethylene signaling works antagonistically to regulate suberization. 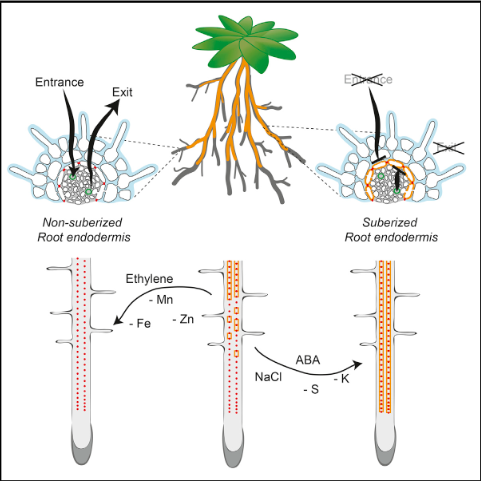 The picture above explains the whole story in a zist form. Involvement of specific nurtients followed by either ABA or ethylene signalling resulting level of suberin deposition.

For original research article, follow the link below:
Adaptation of Root Function by Nutrient Induced Plasticity of Endodermal Differentiation