- February 22, 2020
Like a sailor uses a compass to find the direction to navigate the ship, how does a cell navigate itself without a compass? or do they have their own compass? Let me break the question into a simpler version. Cells need to know where they will make their next cell or in which direction? Cell does their stuffs through proteins. Is it possible that cell uses some proteins to act as compass? If so, what should be function of those proteins? Similar to compass, they will direct the cell to a certain direction, exactly as compass. We can imagine, rather than roaming here and there inside the cell, those proteins will localize into a certain part of the cell. You are right - they will hang out in one corner of the cell to show the direction, in general term.

I am a plant biologist, assuming that most of the readers already know that. I love to think about the direction of the cell, more precisely plant cell. There are already a substantial amount of plant proteins we already know, who localizes in the one side of the cell. We call them "polarized protein" - we should call them "cell compass".

Two years back Dolf Weijers's group identified a protein, named it SOSEKI, which localizes to the polar cell edges. Just the way we were thinking about the cell compass. Pretty cool, huh? The way SOSEKI protein in localized in the one corner or edge of the cell, they refereed it as "cornerstone", which in Japanese says SOSEKI. 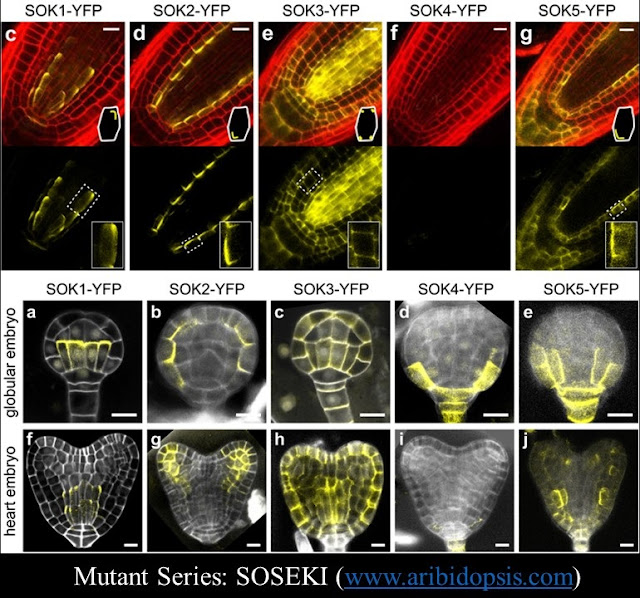 Interestingly, SOSEKI is expressed mostly during embryogenesis, primary and lateral roots. I personally like the timing of SOSEKI expression. Because, SOSEKI expression disappeared during cell division and afterwards it appears quickly in the edge of the cell. Philosophically it sounds like that when cells are dividing, SOSEKI is not required, but once there are new cell, SOSEKI starts expressing to provide the direction as "cellular compass".