- December 27, 2018
We are almost at the end of another year. Undoubtedly, we came across amazing research and review articles in this year. As plant biologists, we are more focused on plant-specific journals. Along with those plant-specific journals, plant-related stories are making their place into other journals too. Like previous years, this year also, I'm covering plant biology stories published in Cell, Science, and Nature all the year round. In this post, you'll find published papers from Science. 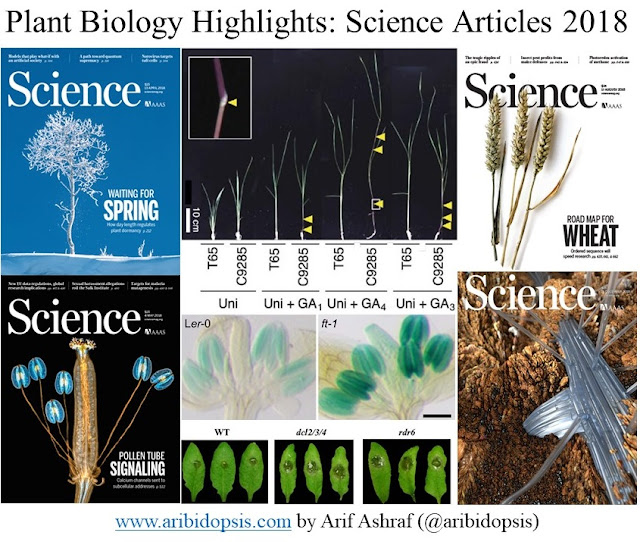 In temperate and boreal ecosystems, seasonal cycles of growth and dormancy allow perennial plants to adapt to winter conditions. They showed, in hybrid aspen trees, that photoperiodic regulation of dormancy is mechanistically distinct from autumnal growth cessation. Dormancy sets in when symplastic intercellular communication through plasmodesmata is blocked by a process dependent on the phytohormone abscisic acid. The communication blockage prevents growth-promoting signals from accessing the meristem. Thus, precocious growth is disallowed during dormancy. The dormant period, which supports robust survival of the aspen tree in winter, is due to loss of access to growth-promoting signals.

Compared to animals, evolution of plant calcium (Ca2+) physiology has led to a loss of proteins for influx and small ligand–operated control of cytosolic Ca2+, leaving many Ca2+mechanisms unaccounted for. Here, they showed a mechanism for sorting and activation of glutamate receptor–like channels (GLRs) by CORNICHON HOMOLOG (CNIH) proteins. Single mutants of pollen-expressed Arabidopsis thaliana GLRs (AtGLRs) showed growth and Ca2+ flux phenotypes expected for plasma membrane Ca2+ channels. However, higher-order mutants of AtGLR3.3 revealed phenotypes contradicting this assumption. These discrepancies could be explained by subcellular AtGLR localization, and they explored the implication of AtCNIHs in this sorting. They found that AtGLRs interact with AtCNIH pairs, yielding specific intracellular localizations. AtCNIHs further trigger AtGLR activity in mammalian cells without any ligand. These results reveal a regulatory mechanism underlying Ca2+ homeostasis by sorting and activation of AtGLRs by AtCNIHs.

Plants integrate seasonal signals, including temperature and day length, to optimize the timing of developmental transitions. Seasonal sensing requires the activity of two proteins, FLOWERING LOCUS C (FLC) and FLOWERING LOCUS T (FT), that control certain developmental transitions in plants. During reproductive development, the mother plant uses FLC and FT to modulate progeny seed dormancy in response to temperature. They found that for regulation of seed dormancy, FLC and FT function in opposite configuration to how those same genes control time to flowering. For seed dormancy, FT regulates seed dormancy through FLC gene expression and regulates chromatin state by activating antisense FLC transcription. Thus, in Arabidopsis, the same genes controlled in opposite format regulate flowering time and seed dormancy in response to the temperature changes that characterize seasons.

Some pathogens and pests deliver small RNAs (sRNAs) into host cells to suppress host immunity. Conversely, hosts also transfer sRNAs into pathogens and pests to inhibit their virulence. Although sRNA trafficking has been observed in a wide variety of interactions, how sRNAs are transferred, especially from hosts to pathogens and pests, is still unknown. Here, they showed that host Arabidopsis cells secrete exosome-like extracellular vesicles to deliver sRNAs into fungal pathogen Botrytis cinerea. These sRNA-containing vesicles accumulate at the infection sites and are taken up by the fungal cells. Transferred host sRNAs induce silencing of fungal genes critical for pathogenicity. Thus, Arabidopsis has adapted exosome-mediated cross-kingdom RNA interference as part of its immune responses during the evolutionary arms race with the pathogen. 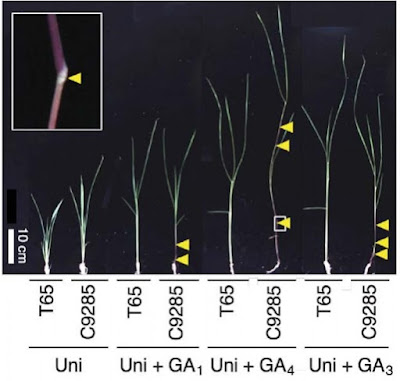 Most plants do poorly when flooded. Certain rice varieties, known as deepwater rice, survive periodic flooding and consequent oxygen deficiency by activating internode growth of stems to keep above the water. Here, they identified the gibberellin biosynthesis gene, SD1(SEMIDWARF1), whose loss-of-function allele catapulted the rice Green Revolution, as being responsible for submergence-induced internode elongation. When submerged, plants carrying the deepwater rice–specific SD1 haplotype amplify a signaling relay in which the SD1 gene is transcriptionally activated by an ethylene-responsive transcription factor, OsEIL1a. The SD1 protein directs increased synthesis of gibberellins, largely GA4, which promote internode elongation. Evolutionary analysis shows that the deepwater rice–specific haplotype was derived from standing variation in wild rice and selected for deepwater rice cultivation in Bangladesh.

To understand evolutionary factors that maintain complex trait variation, they sequenced genomes from a single population of the plant Mimulus guttatus, identifying hundreds of nucleotide variants associated with morphological and life history traits. Alleles that delayed flowering also increased size at reproduction, which suggests pervasive antagonistic pleiotropy in this annual plant. The “large and slow” alleles, which were less common in small, rapidly flowering populations, became more abundant in populations with greater plant size. Furthermore, natural selection within the field population favored alternative alleles from year to year. Their results suggest that environmental fluctuations and selective trade-offs maintain polygenic trait variation within populations and also contribute to the geographic divergence in this wildflower species.

Insect herbivores depend on their host plants to acquire macro- and micronutrients. Here, they showed how a specialist herbivore and damaging maize pest, the western corn rootworm, finds and accesses plant-derived micronutrients. They demonstrated that the root-feeding larvae use complexes between iron and benzoxazinoid secondary metabolites to identify maize as a host, to forage within the maize root system, and to increase their growth. Maize plants use these same benzoxazinoids for protection against generalist herbivores and, as shown here, for iron uptake. They identified an iron transporter that allows the corn rootworm to benefit from complexes between iron and benzoxazinoids. Thus, foraging for an essential plant-derived complex between a micronutrient and a secondary metabolite shapes the interaction between maize and a specialist herbivore.

Animals require rapid, long-range molecular signaling networks to integrate sensing and response throughout their bodies. The amino acid glutamate acts as an excitatory neurotransmitter in the vertebrate central nervous system, facilitating long-range information exchange via activation of glutamate receptor channels. Similarly, plants sense local signals, such as herbivore attack, and transmit this information throughout the plant body to rapidly activate defense responses in undamaged parts. Here they showed that glutamate is a wound signal in plants. Ion channels of the GLUTAMATE RECEPTOR–LIKE family act as sensors that convert this signal into an increase in intracellular calcium ion concentration that propagates to distant organs, where defense responses are then induced. 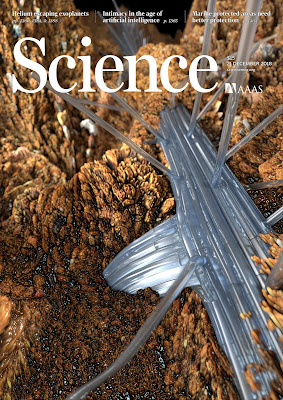 A hidden cradle of plant evolution in Perminal tropical lowlands

The latitudinal biodiversity gradient today has deep roots in the evolutionary history of Earth’s biota over geologic time. In the marine realm, earliest fossil occurrences at low latitudes reveal a tropical cradle for many animal groups. However, the terrestrial fossil record—especially from drier environments that are thought to drive evolutionary innovation—is sparse. They presented mixed plant-fossil assemblages from Permian equatorial lowlands in present-day Jordan that harbor precocious records of three major seed-plant lineages that all became dominant during the Mesozoic, including the oldest representative of any living conifer family. These finds offer a glimpse of the early evolutionary origins of modern plant groups in disturbance-prone tropical habitats that are usually hidden from observation.
Basic plant science

We are almost at the end of another year. Undoubtedly, we came across amazing research and review articles in this year. As plant biologists, we are more focused on plant-specific journals. Along with those plant-specific journals, plant-related stories are making their place into other journals too. Like previous years, this year also, I'm covering plant biology stories published in Cell, Science, and Nature all the year round. In this post, you'll find published papers from Nature.


Dodders (Cuscuta spp.) are obligate parasitic plants that obtain water and nutrients from the stems of host plants via specialized feeding structures called haustoria. Dodder haustoria facilitate bidirectional movement of viruses, proteins and mRNAs between host and parasite, but the functional effects of these movements are not known. Here, they showed that Cuscuta campestris haustoria accumulate high levels of many …
Read more

This weekend I went to the theater with friends to watch "Black Panther". Most of the times, I fall in sleep in the halfway of the movie. Fortunately, I didn't at this time. Apart from that, this movie implanted few questions in the viewer's mind. One issue is definitely about the "heart-shaped herb".


Mythology and Technology of Wakanda
The story of the movie went way back to the history of Wakanda and the futuristic technological advancement of the tribe. There is a subtle link between their past and future. Their groundbreaking future technologies are based on Vibranium. In the past, the place was crashed by a huge meteorite containing Vibranium. It caused massive radiation, stayed in their environment till today and undoubtedly changed the ecology of Wakanda. It shaped the plant life in that region. The radiation-caused mutation gave rise to a diverse plant kingdom, which is rare in the other part of the world. The heart-shaped herb was one of the example…
Read more

It is always fascinating how a small hydrocarbon or 2 carbon containing alkene has huge impact on plants. Yes, you gussed it right. It's Ethylene. First gaseous compound discovered as hormone. It has specific roles in fruit ripening, cell elongation, senescence, seed germination, leaf abscission, defense response and so on.


According to the definition of hormone, it should have two characteristics. Biosynthesized in a small amount by multi cellular organism and work on a distant place from the synthesis site. This classical definition for hormone was provided by Ernest Starling at 1905. Ethylene fulfills both requirement as a hormone. In addition, it can diffues and affect surrounding plants. We may consider it as pheromone in that case.

The initial discovery of ethylene is nothing but accidental observation like penicillin. In 1858, George Fahnestock observed that leaking illuminating gas are causing damage to the plants at greenhouse. During that time illuminating gas was used…
Read more

I am doing this plant biology CNS (Cell - Nature - Science) paper highlights since 2016. Every winter break, it is a fun job for me to do. I enjoy as much as writing a New Year card to my favorite person. It is also a reminder for myself that lots of great science are going on and I have to do better next year and keep trying to make a difference. Here, I have previewed plant biology stories published this year in Nature.

Apical growth in plants initiates upon seed germination, whereas radial growth is primed only during early ontogenesis in procambium cells and activated later by the vascular cambium. Although it is not known how radial growth is organized and regulated in plants, this system resembles the developmental competence observed in some animal systems, in which pre-existing patterns of developmental potential are established early on. Here they show that in Arabidopsis the initiation of radi…
Read more

Mutant Series: TOO MANY MOUTHS (TMM)

If you don't have clear idea about stoma and pavement cell, I'll request you to go through the following link first.
Mutant Series: SCREAM (SCRM)
Back in 90's, the knowledge about stomatal development and regulation was limited. In the forward genetic approach, we can mutated genes all over the genome in a random fashion. This job is mostly done by Ethyl Methane Sulfonate (EMS). From that randomly mutated population, we screen for our desired traits or phenotypes. In case of stomatal development, if we can find phenotypes containing less or more stoma or abberant pattern.
Ming Yang and Fred D. Sack from Ohio State University took the forward genetic approach to understand the stomatal development. They have found two interetsting mutants: tmm and flp. tmm and flp represent  too many mouths and four lips, respectively. In case of wild-type plants, we rarely observe two adjacent stomata cells (left panel). In contrast, tmm shows cluster of stomata cells which is opposite to t…
Read more