- July 08, 2018
It's the time of the Football World Cup and we are going to find out the new champion within a week or so. It was a quite exciting month, but it doesn't mean that I can take a break from my regular study/work. These days I was working on auxin inhibitors and found something really interesting to share. Here it goes.

Auxin uses diffusion and transport system for cell to cell movement. Popular auxin transporters are AUX1 as influx carrier; PINs as efflux carrier and several ABC transporters (ABCB1 and ABCB19). We often use chemical inhibitors of transporters to understand the transport mechanism and physiological perspective of plant development. Dissect the auxin efflux by separating the involvements of PINs and ABC transporters are usually carried out through specific inhibitors targeting ABC transporters. One of them such inhibitors is 2-[4-(diethylamino)-2-hydroxybenzoyl]benzoic acid a.k.a. BUM. BUM does not affect PINs as like as another inhibitor Gravacin. An interesting fact here is: the short form, BUM, does not seem like it's derived from the chemical name. Yes, you are right! 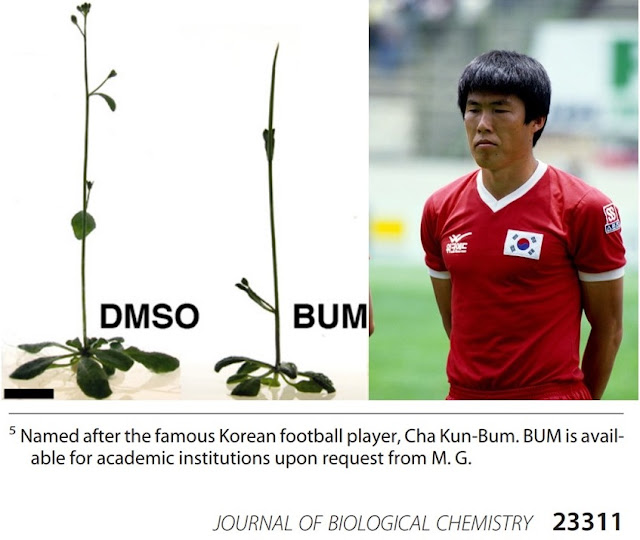 To identify growth and developmental regulators, Arabidopsis thaliana (ecotype Columbia; Col Wt) seedlings were screened with a chemical library (Korean Chemical Bank, KRICT, Korea) composed of 6,500 small organic compounds (reference of the original research article). This screening identified compound 10824 as a strong modifier of plant development. Due to its pronounced physiological effects, it was named after the famous Korean football player, Cha Kun-Bum. He has a nickname (Tscha Bum) in Germany ("Cha Boom") because of his name and his thunderous ball striking ability.

Who thought that the auxin transport inhibitor is named after a footballer! It's really cool to know this story and accidentally stumbled on such a weird connection during the time of Football World Cup.