- May 08, 2018
It's been few months, I haven't share any whimsical or funny gene or mutant. Partly, I was extremely busy with manuscript writing (academic excuse!) and another way, just holding myself to start with a very exciting story out of my comfort zone. Recently, I read an amazing article and definitely involves a funny and logical name too. Here it goes.

During the evolution of land plants, we mostly observe flowering plant capable of producing fruits. These flowering plants are known as "angiosperm in plant biology term. Among flowering plants, we sometimes see that male and female organ stay at the same time, called "hermaphroditism". But, there is another type, which has a more similar sexual system as human. In that case, an individual plant has either male or female identity like the human. This is known as "dioecious". In the evolutionary time scale, dioecious plants appear later. 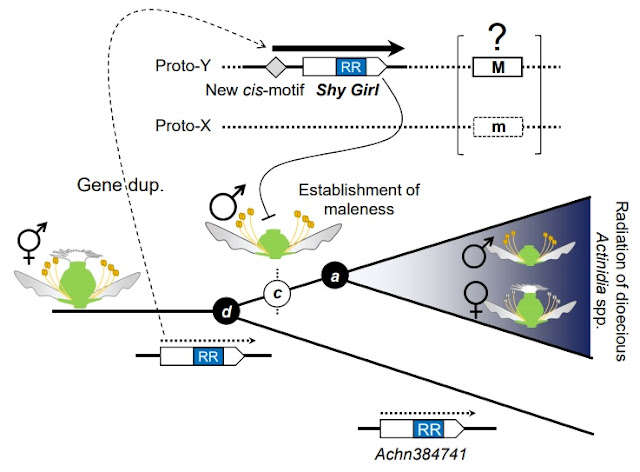 In a recent paper published in the Plant Cell, they identified a type-C cytokinin response regulator (RR) of kiwifruits as a sex-determining factor. They named this gene ‘Shy Girl (SyGI)’ as it is a dominant suppressor of carpel development. The function of this is also tested in the model plant Arabidopsis thaliana. Expressing SyGI gene in Arabidopsis also induces female sterility without impairing male fertility.

For details, find the research article in the following link:
A Y-encoded Suppressor of Feminization Arose via Lineage-specific duplication of a Cytokinin Response Regulator in Kiwifruit
Mutant