Why Arabidopsis Why: Morning Glory

You are out on the street and need to cross the road. The first thing to look is the traffic light. Wating for the green signal. Based on that signal (red/yellow/green), you are going to navigate your direction. Plants need to know the direction like us. Without knowing the direction, it wouldn't be able to navigate to find water, nutrients (down) and sunlight (up). The one universal direction force truth for us and everything else is GRAVITY. Plants have the ability to sense the "gravity" and following the rules of gravity, characteristic known as "gravitropism".  Upon sensing the gravity, plants decide their developmental cues. For instances, plants increase their apical meristems to higher positions, synthesize tough cell walls to withstand gravitational forces and so on. We call this gravity-based organ development as "gravimorphogenesis".

Apart from gravitropism, Circumnutation is independent, autonomous movement of plant organs such as hypocotyl, coleoptile, epicotyl, stem, shoot, tendril, petiole or root. Circumnutation came from Latin "circus" means “circle” and "nutatio" means “sway”. There is a easier way to explain circumnutation.  If we observe the growth of the tip, it usually outlines a circle, full ellipsis, pendulum-like shape or irregular zigzags within several minutes - to several hour-long periods. Charles Darwin first described circumnutation movements extensively in The Power of Movement in Plants and showed this movement in several plant species.

Start with the toy Arabidopsis

We exploited the genome of Arabidopsis to understand gravitropism and other movements. Creation of mutants facilitates the extensive study of movement as well as developmental mechanisms. Scientists identified mutants unable to distinguish between up and down. In brief, upon changing the direction, they are unable to sense the gravity. One of the most interesting mutants known as scarecrow (hope to cover this one in Mutant series in future). If we rotate the direction of this mutant, the root is smart enough to sense the gravity, but shoot keeps growing horizontally without changing the direction. This phenomenon has made the whole story cool. It suggests that root and shoot have distinct gravity sensing mechanism. In scarecrow, only shoot loose its gravisensor.

In detail scientific context, SCARECROW is indispensable for the endodermis formation. This layer of cells, endodermis, controls the water and nutrient movement towards xylem. In scarecrow, due to the lack of this gene, they are unable to form endodermis and we observe weak root phenotype consequently, but root can perfectly sense the gravity. Because root sense the gravity through root tip and it doesn't contain endodermis. But, in the stem, the gravity sensor is at the endodermis. That's why scarecrow mutant is unable to sense gravity in the aerial part.

Get out of the box

We all have ideas about ornamental plants. One of the most common types is, you keep the plant in a pot and it will find its way all the way down towards the ground. It looks nice, isn't it? But, did you ever wonder why it is exceptionally going down rather than going up? This hanging behavior is considered as "weeping". The following picture is taken from my university campus (in front of the library of Iwate University, Japan). You clearly see that there are few flowers with attractive colors and along with those, few plants going towards the ground. We are talking about this hanging ornamental plant. 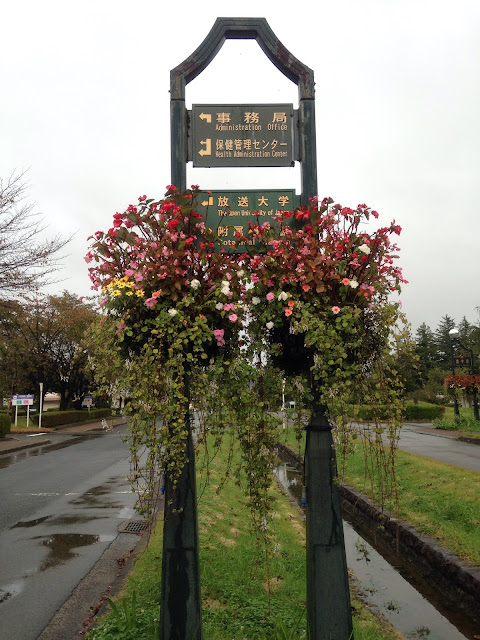 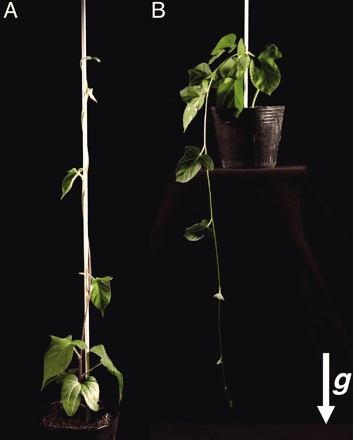 Recent study showed that Shidare-asagao (weeping) phenotype has one amino acid inserted between amino acids 523 and 524. The inserted amino acid was predicted to be an isoleucine. Our prior knowledge about SCARECROW and its role in the development of endodermis, aerial part specific gravity sensor helped us to decipher the science behind this beautiful ornamental plant, Shidare-asagao.

As I always mentioned in the earlier posts of this series, the profound genetic basis for plant growth, development, response, and regulation, we know through Arabidopsis thaliana is beyond our imagination. We have enough resources from this weed to translate into much more meaningful and real-life problem-solving.