Why Arabidopsis Why: Early Flowering Gene

- August 25, 2017
Flowering time is one of the major key factors for plants to skip unfavorable environmental conditions. The genetic circuit for early flowering is well studied in our favorite model plant Arabidopsis thaliana. Like any other posts of this "Why Arabidopsis Why" Series, I'm going to explain how our knowledge about early flowering from Arabidopsis helps to translate it on crop plants.

Chickpea is a highly cultivated member of the legume family, mostly in India, Australia, Pakistan, Turkey, Burma, Iran, Canada and the USA. The detrimental threat for chickpea is the invasion of Ascochyta blight. This is caused by the fungal pathogen Ascochyta rabiei (formerly known as Phoma rabiei). In the asexual stage of its life cycle, it survives mainly on infected seed. Spores of the fungus produced on crop residues are carried into new crops by the wind. Infection can occur regardless of the stage of plant growth, whenever conditions are favourable. Moisture is helpful for infection to occur. During wet weather, the disease can spread faster than in dry season as spores of the fungus are carried onto neighbouring plants by wind and rain easily. 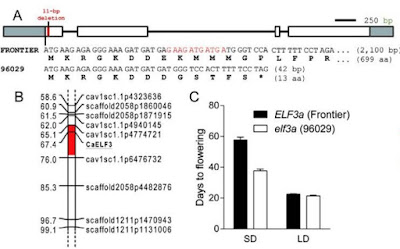 The two possible ways to combat this problem are - finding resistance gene or finding early flowering gene. In Indian region, harvest depends on the rainfall, but eventually encounter the drought at the end of the season. In cold region like Saskatchewan, Canada, frost free period is 110 - 120 days, whereas chickpea takes 110-130 days to become mature. An early flowering variety or finding out the early flowering gene will circumvent the situation.

The research group of Bunyamin Taran from the University of Saskatchewan, Canada took the latter approach. They mapped, sequenced and characterized an early flowering gene, Efl1, in chickpea. Interestingly, it's an ortholog of Arabidopsis early flowering gene EFL3. They have identified 11 bp deletion in the first exon, which causes premature termination, in the early flowering variety. A search through globally 236 lines from germplasm confirmed that 13 lines contain this 11 bp deletion. The variation has been arisen in recent times within Indian germplasm to enhance an existing early flowering phenotype.