- July 01, 2017
Plants produce its own food through the process of photosynthesis, a combination fo water, carbon dioxide with the help of sunlight to produce sugar for itself and release oxygen for us. The entrance of gaseous components (carbon dioxide) is mediated through specialized cell known as the stoma. These specialized cells have the capacity to open and close themselves. In contrast, cells don't have such capacity is called pavement cells.

A cell's fate to become either pavement cell or stoma depends on an intricate circuit of three proteins (SPEECHLESS-MUTE-FAMA). This circuit ensures stomatal differentiation or on the other hand, proliferative cell division results into pavement cells. Keiko Torii and her team did the amazing job so far to understand this molecular process.

Pavement cells and stoma seats side by side and make a nice patterning. Between two stomata cells, there is always at least one pavement cell as spacing. Keiko Torii and her team identified one interesting semi-dominant mutant, where there are no pavement cells, all of the cells are stoma. In this mutant, it looks like all the cells are open. It gives a feeling that cells are screaming! 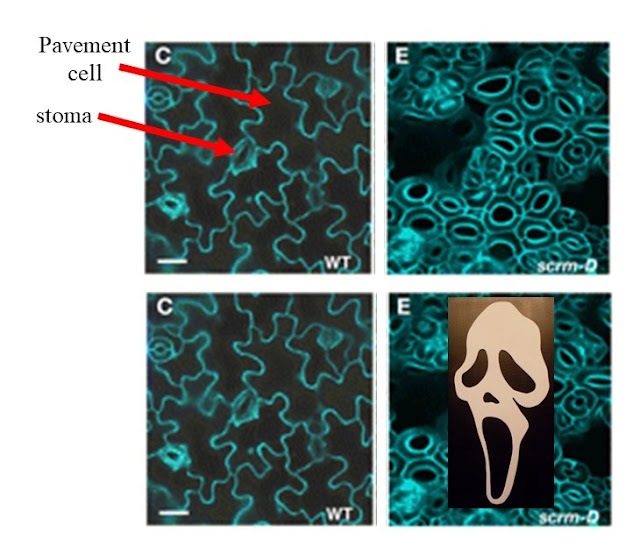 On the figure above, we observe beautiful patterning of pavement and stomata cells (top panel, left). In the SCREAM mutant (scrm-D), we observe only stomatal cells rather than pavement cells. This scenario is similar to screaming face.