Why Arabidopsis Why: Anaphase Promoting Complex

- September 11, 2016
Initially I thought I was right on the target. What's the target? To work on something which is plant specific. Living oragnisms share common processes such as generation of DNA and RNA, synthesis of protein, cell proliferation, signaling through molecules and so on. Plant hormones (auxin, ethylene, cytokinin, ABA, GA etc.) are specific to plants, not shared with other organisms. So, the study of phytohormone kept me thinking that I was dealing with something plant-specific. My thinking upto this mark is like scratching the surface rather than wondering the deep down philosophy. The next question was: What these phytohormones do? To cut the long story short; they are involved in developmental processes. The rudimentary developmental process is cell division. And, cell cycle and its components have similarity regardless of organisms. Now you see, I'm wrong! Looking at the bigger picture helped me to understand that what-so-ever our study is, it has universal implication. Model plant Arabidopsis is not an exception. Its smaller genome has much more promises due to the ease of experimentation. So, I'm going to just on a brand new story for Why Arabidopsis Why series.

A subunit of APC complex, APC10 (E3 ligase), was first identified from a yeast mutant strain. On that APC10 yeast mutant, it was unable to degrade mitotic cyclins. Later the same phenomenon was observed in Schizosaccharomyces pombe (fission yeast), Saccharomyces cerevisiae (budding yeast), and mammals.  Surprisingly, the gene of APC10 from Arabidopsis can complement yeast mutant (reference at the bottom of the post). 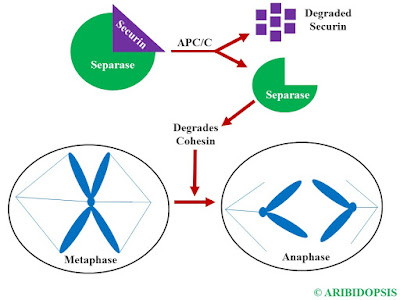 The whole discussion is pointless if I don't focus on the function of APC/C. APC/C degrades Securin and releases its associated protein, Separase. After immediate release of Separase, it targets Cohesin (binds sister chromatids together). During metaphase stage, sister chromatids are linked by Cohesins. So, after the degradation of Cohesins, sister chromatids become free to move to opposite poles for anaphase. That's how APC/C got its name as Anaphase-promoting complex. In addition, APC/C degrades mitotic cyclins, as result cell can't go for mitosis. In other way, it skips mitotic event due to the lack of cyclins or degradation of cylins and go for endoreduplication and elongates cell. Awesome!

If I broaden the horizon about APC/C, it hits very special issue. Cancerous events are nothing but uncontrolled growth or more precisely, cell division. Targeting or blocking APC/C is one of the potential way to stop cell division. But, less was known about APC/C. Two years ago, a research article has been published in Nature about the associated proteins and whole complex of APC/C from human system. This discovery advanced the knowledge about APC/C as well as mitotic event and will help to use it as a target for carcer drugs. In parallel, the same protein and complex exists on Arabidopsis. It's really easy to manipulate and accelarate the experimentation in Arabidopsis to find out precise interacting domains, associated proteins in different mitotic events, degradation mechanism and what not.

Several research articles have been published related to APC/C of Arabidopsis. You may follow those articles to correlate the research finding from the both end. It's really fascinating!

Figure:
You are always welcome to use the figure with proper credits
Basic plant science