Why Arabidopsis Why: Chemopreventive

- August 27, 2016
It's unacceptable as I didn't post anything for such a long time. Actually I was away from my lab for the internship program and coming back, got busy, struggling with to-do-list and successfully failed to cope up! Tons of frustrating hours, negatives results and so on kept me away from the next post I was thinking.

Why we study Arabidopsis? One question which has endless answers. Recently I read an article (Disintegration of microtubules in Arabidopsis thaliana and bladder cancer cells by isothiocyanates) and this is another appropriate feather for "Why Arabidopsis Why" series.

Isothiocyanates (ITCs) are plant derivatives which has cytotoxic effects on both plant and mammalian cells. Interestingly, ITCs are available in edible plants. Ah, then why it doesn't bother the host plant or even us if it has cytotoxic consequences? In plants, mostly cruciferous like mustards, broccoli, cauliflower and brussel sprouts; we don't get ITCs unless it is hydrolyzed from Glucosinolates by myrosinases. Plant tissue damage causes the release of volatile ITCs and due to the bad odor herbivores keep them away from those plants.

ITCs contain electrophiles (-N=C=S) and inhibits the growth of both plant and mammalian cells. Although natural isothiocyanates, allyl isothiocyanate, is known as mustard oil. Another important use of isothiocyanate is during amino acid seuqencing in the Edman reaction. After all those discussion about isothiocyanates, the one questions remains, how ITCs inhibit cell growth?

I'm particularly interetsed on this perspective. Because growth of cells depend on cell division and elongation/enlargement. This phenomenon is common regardless of plants, mammalian and microbial cells. So, the answer will help to understand basic cell cycle mechanism which is applicable for any cell line.

ITCs work as chemopreventive agents as it can control un-controlled cell divison, rudimentary characteristics of cancer cells. It has been reported that ITCs interact with tubulin and arrest cell cycle at G2/M phase which leads to apoptosis or cell death. Similar study in Arabidopsis thaliana showed the disruption of microtubules followed by ITCs treatment.

FYI, tubulin polymerizes into microtubules and microtubules are important for mitosis event. It is already known that tubulin binding drugs have the potentiality to stop cancer cells. Because of the absence of microtubules, DNA segregation doesn't happen and as result no cell division. 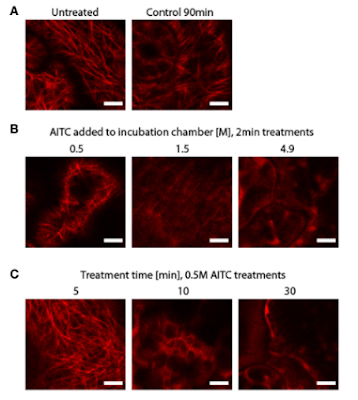 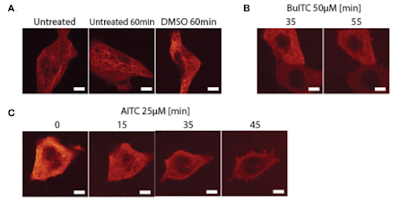