- April 29, 2016
I'm back with ethylene-centric blog post series. Hope you took a look on the review of ethylene symposium, JSPP 2016 and last post about Nobel prize controversy. If you didn't, you are never too late to read those posts. I'm having around 10 days holidays, although I've experiments to do during that time. I promise myself to read and subscribers to write as much as possible on folllowing couple of weeks.

Unlike other plant hormones, ethylene is a gas. Detection and measurement for any hormone is critical till today. In one hand, a group of scientists were skeptical about ethylene as hormone and on the other hand, the measurement of ethylene was really diffiuclt. Keep in mind that we are discussing about the beginning of 1900s. Two features are required for a good detection method. Sensitivity and Accuracy. Before 1950s, ethylene measurement was a painstaking job. For example, Gane accumulated gas from 60 pounds of apples for around one month to detect ethylene and published that data at 1934. 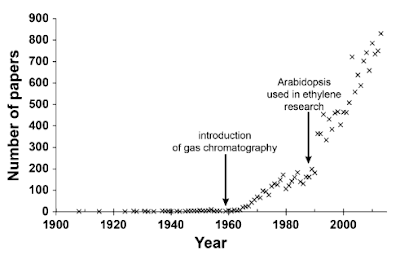 Advent of gas chromatography and flame ionization detector had changed the whole ethylene field. In the above figure, number of published papers related to ethylene over time is showed. It's clear that after 1950s, it has been increased. And, that was the time point for the introduction of gas chromatography. This powerful techlique led to the discovery of biochemical pathway for ethylene biosynthesis and ethylene binding site also in next few decades.

In addition, there is another interesting time point highlighted on the above graph. That time point indicates from when Arabidopsis had been started to use in research. This tiny weed changed everything in plant science research. And if you are not aware why should I care about Arabidopsis, you are welcome to explore WHY ARABIDOPSIS WHY series to know about amazing stories. Coming back to the graph, use of Arabidopsis as model plant facilitates scientist to do quicker experiments, which also helped to uplift ethylene research. Not but the least, application of molecular biology opened another door to look at the things we saw before on biochemical basis. Due to these biological science blessings, we saw a huge progress about our understanding on ethylene signaling and control of ethylene biosynthesis.

Upto this post of ethylene series, I have discussed more about how ethylene was identified as a hormone, popular controversy about ethylene and contribution of gas chromatography, Arabidopsis as a model plant and molecular biology to discover more about ethylene.

From the next post of this series, I will focus more on biosynthesis, transport and signaling one by one. Be with me, discuss, argue and take a fun ride of ethylene exploration.