Why Arabidopsis Why: Ethylene Signaling

- February 27, 2016
Welcome back to Why Arabidopsis Why series. If you missed the first post of this series, you may find it here. As I wrote in the previous post, I'll try to cover stories where we gained knowledge through Arabidopsis research and applied for other plant species successfully.

Ethylene is a well studied plant hormone. FYI, unlike other hormones, it's been found in gaseous form. It has no color and smell. That's why when other hormones require transporter, it requires receptor. As a phytohormone, its function covers fruit ripening, abscission of plant parts, released during physical and mechanical injury, epinasty (bending of stems), maintaining root apical meristem and so on.

As already mentioned about receptor requirement for ethylene perception by cell, for the broad idea about ethylene action inside cell demands the knowledge about ethylene signaling. The following figure (prepared by me for presentation) will give an overview about the proteins involved in ethylene biosynthesis and signaling. Here, ETR1,ETR2,ERS1,ERS2,EIN4 are involved in ethylene perception. This perception from the membrane is passed through downstream signaling molecule (CTR1 and EIN2) towards the nucleus. Inside nucleus, transcription factors (EIN3,EIL1,EIL2,EIL3) turn on or turn off the expression of downstream regulatory genes. 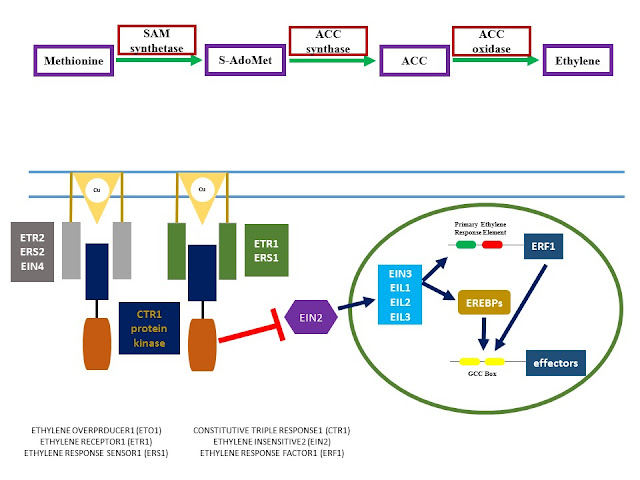 This signaling pathway is well studied in Arabidopsis and except few exceptions, true for other plant species. The most valuable property of ethylene involves fruit ripening. Think about fruits such as cherries and blueberries, they do not produce much ethylene and it doesn't influence their ripening. On the other hands, fruits such as apples and pears produce ethylene to help them in fruit ripening.

Dr. Harry J. Klee (you may visit his page Harry's Tasty Tomato) has some ground breaking research about ethylene receptor and ripening of tomato. In his Plant Cell paper at 1994, he reported about a mutation in particular gene which blocks ethylene perception in tomato. They named it as Never Ripe.

The figure above shows transgenic (left) and control (right) plant. As we can see, transgenic plant can not perceive ethylene, so at a certain stage, it's ripening process is stopped, completely opposite for control tomato.

The basic understanding about ethylene signaling tells us, it may be a mutation in receptor gene. In the following paper at Plant Physiology (1995), they identified that Never Ripe as homolog of Arabidopsis ETR1.

This story is really awesome and I love it. The story tells us how our knowledge from Arabidopsis is translated to other plants like tomato for improving agronomically important traits related to fruit ripening.

In addition, I want to mention several anti-ethylene chemicals. Silver thiosulfate (STS) is used on flowers. Aminoethoxyvinyl-glycine (AVG, trade name ReTain) blocks ethylene synthesis. It is applied preharvest. The fruit (plant) will not produce much ethylene, so there is not an ethylene response. The ethylene blocker 1-methylcyclopropene (1-MCP, trade name EthylBloc) blocks ethylene by binding to its receptor. It is applied postharvest. The fruit (plant) may still produce some ethylene, but there is no response to the ethylene.
Research highlight