- July 24, 2015
Undoubtedly we are living in the age of "genetically-modified-organism (GMO)". Scientist have taken the challenge to meet the demand of growing population through GMO and the other school of thought is completely against the practice of GMO. To break the ice by putting more profound examples for making it understandable that it's basically a natural process. A striking article has recently been published in Proceedings of the National Academy of Sciences by Kyndt and colleagues where they showed the sweet potato as genetically modified by natural events.

For plant scientist, the most popular technique for transferring gene is Agrobacterium mediated. Strains of bacteria from the genus Agrobacterium have a well characterized and widely utilized capacity to introduce DNA into plant cells. The transferred DNA (T-DNA) is specified by short left and right border sequences, and is delivered from the bacterium into plant cells by a mechanism that evolved from bacterial conjugation. Essentially, the bacteria have sex with the plant. The bacteria-derived genes perturb plant hormonal balances causing tumour-like galls, and also modify plant metabolism to support bacterial growth, by forcing the plant to produce sugar–amino acid conjugates called opines that can only be used as nutrients by agrobacteria. 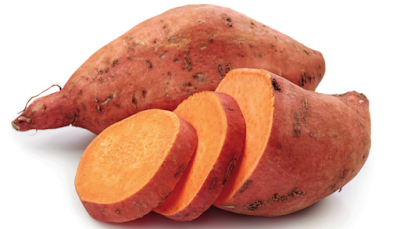 The recent publication has reported that during or prior to domestication, Agrobacterium derived T-DNA became incorporated into the genome of one of the world’s staple crops, the hexaploid sweet potato (Ipomoea batatas). From small RNA sequencing of cultivar Huachano, and assembly of these into longer fragments, homology was detected to several known Agrobacterium T-DNA genes. Sequencing of flanking regions revealed that Huachano carries two surprisingly unmodified T-DNAs, one (IbT-DNA1) with at least four intact Agrobacterium genes, and another (IbT-DNA2) containing five. Moreover, IbT-DNA1 is inserted into  the intron of a plant F-box gene, possibly disrupting its expression. The F-box family contains hundreds of genes, some of which are involved in central signalling pathways such as phytohormone responses.

The bacterium that provided the T-DNAs is probably Agrobacterium rhizogenes, a  strain that induces hairy root proliferation  instead of crown galls. It contains two transferable T-DNA regions: TR-DNA corresponds to IbT-DNA1 (harbouring the auxin biosynthesis genes iaaH and iaaM) and TL-DNA (harbouring the various Rol genes) to IbT-DNA2. Unlike the T-DNA1 domain, IbT-DNA2 was only found in 42 out of 204 tested hexaploid cultivars, 2 of 9 tetraploid relatives and a single diploid, among 217 genotypes investigated.

At some point in the past, perhaps around domestication, thousands of years ago in Latin America, it is possible that an Agrobacterium infection resulted in a sweet potato clone that possessed an interesting trait, which was selected by humans, and somatically propagated as a tuber or root, and subsequently by sexual reproduction.

This finding may be considered as a simple example of horizontal gene transfer. But in this case it shows that we are having same kind of genetically modified food, scientist trying to prepare today, for such a log time without any trouble. Then why not now?

The genome of cultivated sweet potato contains Agrobacterium T-DNAs with expressed genes: An example of a naturally transgenic food crop